The threat of attacks on public surface transportation and staff in the USA and other economically advanced countries has changed so significantly over the past 20 years, there is a need to rethink current security strategies.

That is the primary finding of a new study, Changing Patterns of Violence Pose New Challenges for Public Transport, from the Mineta Transportation Institute (MTI). It found that countries with advanced economies (Group 1) account for a growing percentage of incidents worldwide, with the USA taking the lead in the total number of incidents and number  of fatalities in those countries.

The report’s authors, Brian Michael Jenkins and Bruce R. Butterworth, say that while developing countries (Group 2), especially in South Asia, continue to account for most of the attacks with the highest number of fatalities, advanced economies are seeing a surge in low-level attacks carried out by lone attackers.

By analyzing data from 5,611 attacks against all public surface transport targets that occurred worldwide between January 1970 and July 2022, they observed a growing problem of violence against passengers and staff on passenger trains and at train stations, buses and bus stations, rail infrastructure, and operating and security staff. They not only included explosives and incendiaries, but physical attacks—stabbings, shootings, arson, unarmed physical assaults and other acts of random violence.

“Our analysis indicates a fundamental shift in the threat facing public surface transportation. At the beginning of the decade the people responsible for security were worried about suicide attackers, particularly those motivated by Jihadist ideologies and bent upon causing mass casualties, with large scale bombings as well as the possibility of chemical or biological attacks. However, controls on explosives and precursor chemicals have been strengthened, especially in economically advanced countries,” explained Jenkins.

The authors are quick to warn that large-scale attacks such as Madrid (2004) and Mumbai (2008) should not be dismissed as a potential threat and that bombings continue to constitute more than 55% of all attacks on public surface transportation in developing countries – particularly in South Asia. However, in economically advanced countries, security planners now face a more complicated and insidious threat in the form of increasing attacks by individual criminals, persons described as mentally disturbed, or, in many cases, unknown attackers. The violence is increasingly random and carried out by lone individuals, who can make potentially lethal bombs, which very often do not work. At the same time, there has been an increase in incidents of sabotage by anarchists and environmental extremists.

“Many of the attacks are not ordinary criminal activities such as armed robberies; and most have no political nexus,” explains Butterworth. “The increase in violence at transportation venues appears to parallel a general increase in random public violence and reflects broader societal trends occurring on the streets and elsewhere. Some observers blame the behavior on the pandemic, but the trends precede COVID-19, and are contributing to a sense of insecurity.”

As the majority of attacks appear to be random, risk reflects exposure. Passengers are more numerous than operating personnel but are exposed for shorter periods, so their risk is lower. However, well-publicized events contribute to an atmosphere of fear. There are far fewer operating personnel, but they spend longer times on the job, therefore their exposure to risk is greater. Transportation employees are on the frontline in dealing with violent incidents–often on their own or as targets of the violence. They require protection and training.

“A public fearful of traveling adds to economic difficulties for transportation operators and reduced resources for facilities improvements, service and security. The fact that there are fewer riders may contribute even further to a sense of insecurity and it is possible that increased ridership actually contributes to security,” said Jenkins.

The increasingly individual and spontaneous nature of attacks on surface transportation targets make such attacks less predictable and harder to detect. Intelligence operations, while essential, are less likely to obtain warnings. Attacks are only identified when they begin. Rapid intervention is required to prevent or mitigate casualties, but that in turn requires greater security presence, which is costly to maintain.

While the study is limited to public surface transportation, the phenomenon of increasing violence appears to be much broader and notes that unruly, and sometimes violent, passengers are also a growing problem in civil aviation.

Butterworth stated: “The shift from terrorist to anti-social violence particularly in economically advanced countries is probably far greater than what we include in this report, which is why we call on the governments and transportation operators to better record what is happening to passengers and staff so that we can rethink our security strategies, preparedness and training.”

The full report can be read here.

Figure: Number of attacks in Country Groups* over time 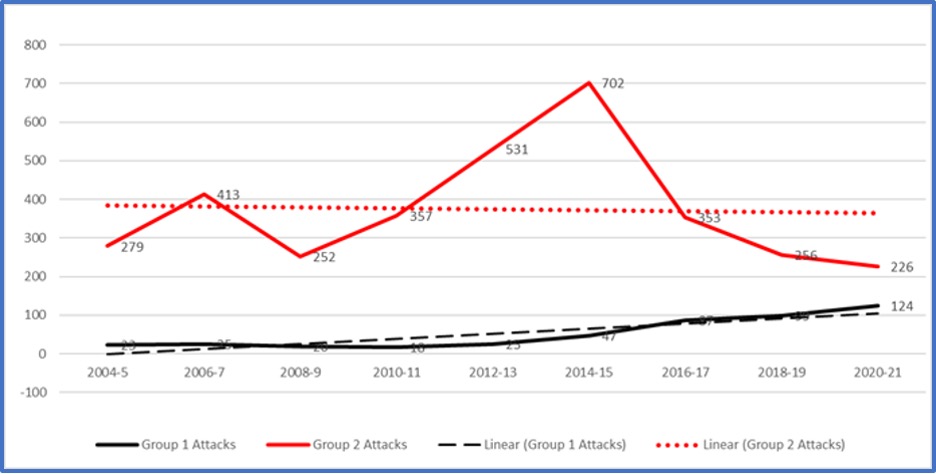 At the Mineta Transportation Institute (MTI) at San Jose State University (SJSU) our mission is to increase mobility for all by improving the safety, efficiency, accessibility, and convenience of our nations’ transportation system. Through research, education, workforce development and technology transfer, we help create a connected world. Founded in 1991, MTI is funded through the US Departments of Transportation and Homeland Security, the California Department of Transportation, and public and private grants, including those made available by the Road Repair and Accountability Act of 2017 (SB1). MTI is affiliated with SJSU’s Lucas College and Graduate School of Business.