“Make whatever preparations are easy for you…select your targets, and carry out a strike that will tear out their hearts and make them lose their minds… a piercing bullet, or a stab deep in the intestines… don’t neglect the ramming attacks on the roads…”- a 2018 exhortation by Abu Bakr al-Baghdadi, leader of the Islamic State of Iraq and Syria (ISIS).

As Jihadist organizations increasingly depend on remote incitement to spread fear abroad, homegrown terrorists have relied on primitive tactics and random targeting. These attacks include stabbing attacks, vehicle 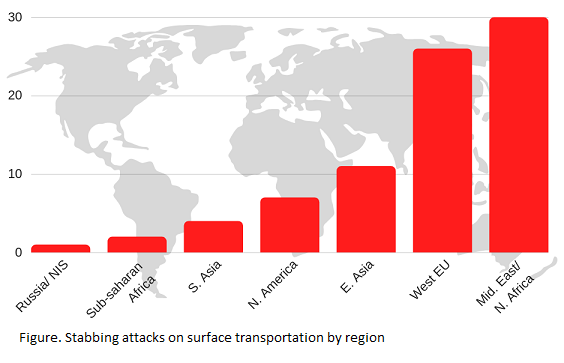 rammings, and—in countries where firearms are readily available—shootings. Homegrown terrorists were also advised to select easy targets where the attacker did not have to penetrate a security perimeter. This meant anywhere people gathered, putting public surface transportation—trains, train stations, buses—high on the list. The Mineta Transportation Institute’s (MTI) latest security perspective, “An Exploration of Transportation Terrorist Stabbing Attacks,” explores terrorist stabbing attacks against the public in general, and then focuses on stabbing attacks that occur in public surface transportation venues.

The challenge of obtaining a firearm or explosives has led to an increase in alternate terrorist methods like vehicle ramming attacks and stabbing or hatchet attacks worldwide. According to report co-author Brian M. Jenkins, “Terrorist strategists have figured out that such attacks, even when they yielded only a handful of casualties, caused greater public alarm than hundreds of larger scale attacks in distant conflict zones.”

Public surface transportation venues are easy to access and often filled with crowds. For example, on October 1st, 2017 a 29-year-old jihadist-inspired man approached two young women, cousins aged 20 and 21, sitting on a bench at Marseille’s main railway station in France. As the man yelled “Allahu Akbar,” the man stabbed one woman in the stomach with a 7 inch knife before slitting the others throat, killing both. French soldiers shot and killed the attacker when he turned his attack on them. Isis claimed the attack. A similar attack occurred less than a year later on August 31, 2018 where two Americans visiting the Netherlands were stabbed in Amsterdam’s Central Station in another jihadist-inspired attack. Police apprehended the attacker.

MTI’s database of attacks on public surface transportation records 81 stabbing attacks using knives, or other sharp objects such as hatchets or swords since 1970. This method represents only a small percentage of all attacks (1.8%) and less than 1% of all fatalities. However, the first stabbing attack in the database did not occur until 2005, so their low percentage since 1970 may reflect that this is a relatively recent attack method.

Geographically, stabbing attacks associated with public surface transportation have occurred most often in Israel (27% of all attacks), with Germany second (11% of attacks), and the United States tied for third with China and the West Bank & Gaza Strip (each with 8.6% of all attacks).

The report also examines stabbing attacks in all public venues (including, but not limited to, public surface transportation) in developed countries in Western Europe, North America, Oceana, and East Asia. Since 2014, there have been 98 attacks with a total of 36 fatalities. Nearly 40% have been on public surface transportation venues. One-third of these public venue attacks have been claimed by Jihadist organizations or committed by Jihadist converts.

“Transportation venues are prominent in the minds of those carrying out stabbing attacks, but the overall number of these attacks remains small,” deduces report co-author Brian Butterworth.

At the Mineta Transportation Institute (MTI) at San Jose State University (SJSU) our mission is to increase mobility for all by improving the safety, efficiency, accessibility, and convenience of our nation's’ transportation system through research, education, workforce development and technology transfer. We help create a connected world. MTI was founded in 1991 and is funded through the US Departments of Transportation and Homeland Security, the California Department of Transportation, and public and private grants. MTI is affiliated with SJSU’s Lucas College and Graduate School of Business.

Brian Michael Jenkins is the director of the Mineta Transportation Institute’s Allied Telesis National Transportation Security Center and since 1997 has directed the Institute’s continuing research on protecting surface transportation against terrorism and other serious forms of crime. Bruce R. Butterworth is a Mineta Research Associate and former Director of Aviation Security Operations at the Federal Aviation Administration. Jean-Francois Clair is a former Inspector General of Police in France and currently teaches in the Graduate School of International Affairs at the institute d’Etudes Politiques de Paris (Sciences-Po) and at the Institute for International and Strategic Research (IRIS). Joseph R. Trella III has over 25 years of public policy experience, specializing in international affairs, in both the public and private sector.