Home
Over three-quarters said that they got more than 60 minutes of physical activity at the event
April 30, 2018
San José, CA

For the third year, the Mineta Transportation Institute (MTI) conducted an independent survey of participants during the City of San José’s Viva CalleSJ open streets to help assess the event’s success. On September 17, 2017, the City of San Jose closed six miles of streets so that people could walk, dance, bike, and explore along the route. The complete report, A Survey of Viva CalleSJ Participants: San Jose, California, 2017, is available online.

An estimated 130,000 people attended the event. Viva CalleSJ offered a wide range of activities, like yoga, Zumba, rock climbing, and live performances, that encouraged participants to keep moving. In a new partnership with Pokémon GO game maker Niantic, Viva CalleSJ enticed players to stay active while on the hunt for rare virtual creatures to capture, train, and battle. For participants looking for a break or an opportunity to refuel, a variety of food trucks and unique vendors were available.

A total of 860 diverse participants completed the survey. Some key findings include:

Figure 1. People come to Viva CalleSJ for both fun and exercise 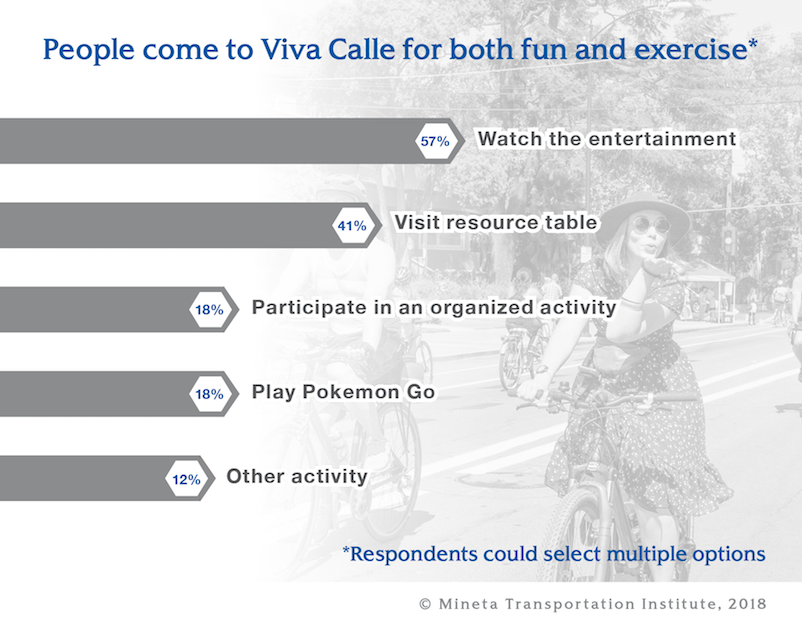 The survey instrument was a one-page paper questionnaire that respondents completed at the event. It was available in English, Spanish, and Vietnamese, the languages most commonly spoken in San Jose. Surveyors distributed the questionnaire to as diverse a set of adult participants as possible at five zones along the route. The sampling strategy was not random, but it was as close to random as feasible given the circumstances. A total of 860 people turned in surveys usable for analysis.

Asha Weinstein Agrawal, PhD, and Hilary Nixon, PhD, are professors of urban and regional planning at San José State University. Cameron Simons is a researcher at the Mineta Transportation Institute.