New research from the Mineta Transportation Institute (MTI) investigates how growth in zero-emission vehicles (ZEV) will impact transportation revenue raised by the State of California through 2040. Authors Martin Wachs, Ph.D., Hannah King, and Asha Weinstein Agrawal, Ph.D., find that if California ZEV ownership grows fast enough to meet the state’s target of 5 million vehicles in the fleet by 2030, then by 2040 the state will collect $2 billion more transportation revenue than it would if ZEV adoption continues at the current (slow) rate (see figure).

“Because the single largest source of state-generated transportation revenue is taxes on gasoline and diesel fuel, people may be surprised by our finding that the state will collect more state transportation revenue overall if ZEV ownership grows faster,” notes lead investigator Dr. Martin Wachs. Fast growth in ZEVs means that the state will more than replace lost fuel tax revenue through higher receipts from two annual fees assessed on vehicles: the “Transportation Improvement Fee” (TIF) that all vehicles pay, and the “Road Improvement Fee” (RIF) that ZEVs will pay starting in 2020.

Co-author Hannah King explains that, “this study used common projection methods and widely-used sources of data to predict future transportation revenue in California through 2040.” The authors looked at two scenarios: a low-adoption scenario assuming that the number of ZEVs in the state continues to grow at the current rate of 26,000 new ZEVs per year, and a high-adoption scenario in which California reaches its goal of five million ZEVs in the state fleet by 2030. The relevant taxes projected for the analysis are:

As with any projections, readers should keep in mind that these rely on numerous assumptions about future trends—gasoline prices, inflation rates, fleet changes, and so on. With the horizon year of 2040 over 20 years away, many unforeseen changes in conditions can—and undoubtedly will—intervene. “For example,” notes co-author Dr. Asha Weinstein Agrawal, “if population were to drop markedly due to some unanticipated economic change, then actual revenues could fall outside the projection bands. Of particular relevance to this analysis is the price for ZEVs in the future. If purchase prices fall much faster than assumed, then revenues may fall outside the values projected in this report.” 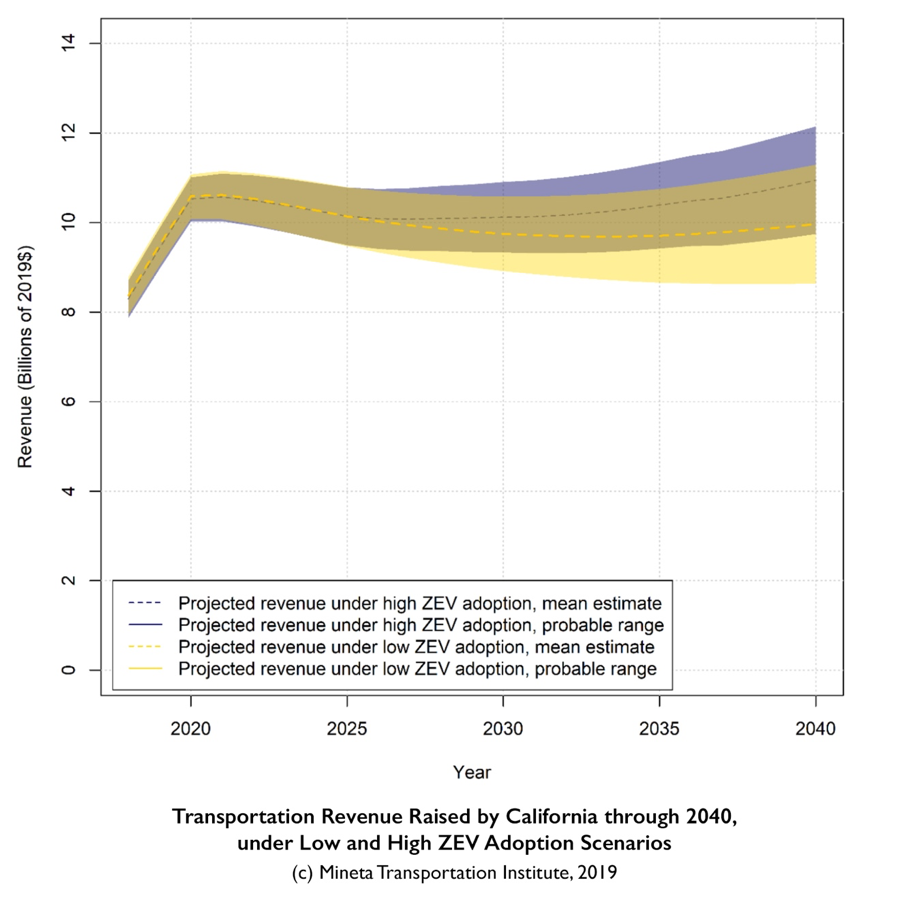 At the Mineta Transportation Institute (MTI) at San Jose State University (SJSU) our mission is to increase mobility for all by improving the safety, efficiency, accessibility, and convenience of our nation's’ transportation system. Through research, education, workforce development and technology transfer, we help create a connected world. MTI was founded in 1991 and is funded through the US Departments of Transportation and Homeland Security, the California Department of Transportation, and public and private grants. MTI is affiliated with SJSU’s Lucas College and Graduate School of Business.

Dr. Martin Wachs is Professor Emeritus of the University of California, Hannah King is doctoral student at UCLA, and Dr. Asha Weinstein Agrawal is a professor at San Jose State University.