The Mineta Transportation Institute has released a new report to help policymakers and researchers tackle the challenge of funding local transportation: How Do California’s Local Governments Fund Surface Transportation? A Guide to Revenue Sources.

“The complexity of local government transportation budgets is a major barrier to identifying long-term reliable and adequate funding sources,” explains Dr. Asha Weinstein Agrawal, lead study author and Director of MTI’s National Transportation Finance Center. “Quite frankly, the system is bewildering even to experts. Every year, California’s 482 cities, 58 counties, and numerous special districts must piece together the puzzle of their transportation budgets with revenue from dozens of taxes and fees imposed by federal, state, regional, and local governments.”

Although the federal government’s new $1 trillion Infrastructure Investment and Jobs Act provides a welcome infusion of transportation revenue in California, the bill will not solve the state’s long-term local transportation funding woes. A 2021 report from the League of California Cities found that expenditures for local streets, roads, and bridges in California would need to increase over current levels by $64 billion over the coming decade just to achieve a state of good repair. Public transit systems face a similar need for major rehabilitation and maintenance, not to mention desired service improvements.

The study presents an overview of the primary federal, state, and local taxes and fees that raise revenue ultimately spent by local governments to fund transportation. The majority of the money comes from taxes and fees paid directly by drivers and transit users. For example, the state raises substantial money for local roads from its fuel taxes and a vehicle registration fee. User fees at the local level include transit fares and tolls. In addition to user fees, both the state and local governments raise revenue from general taxes that have no relationship to transportation system use, such as parcel taxes, hotel taxes, and, especially, from sales taxes.

Billions of Inflation-Adjusted (2020) Dollars Available for California’s Roads and Streets, by Level of Government, 1999–2019 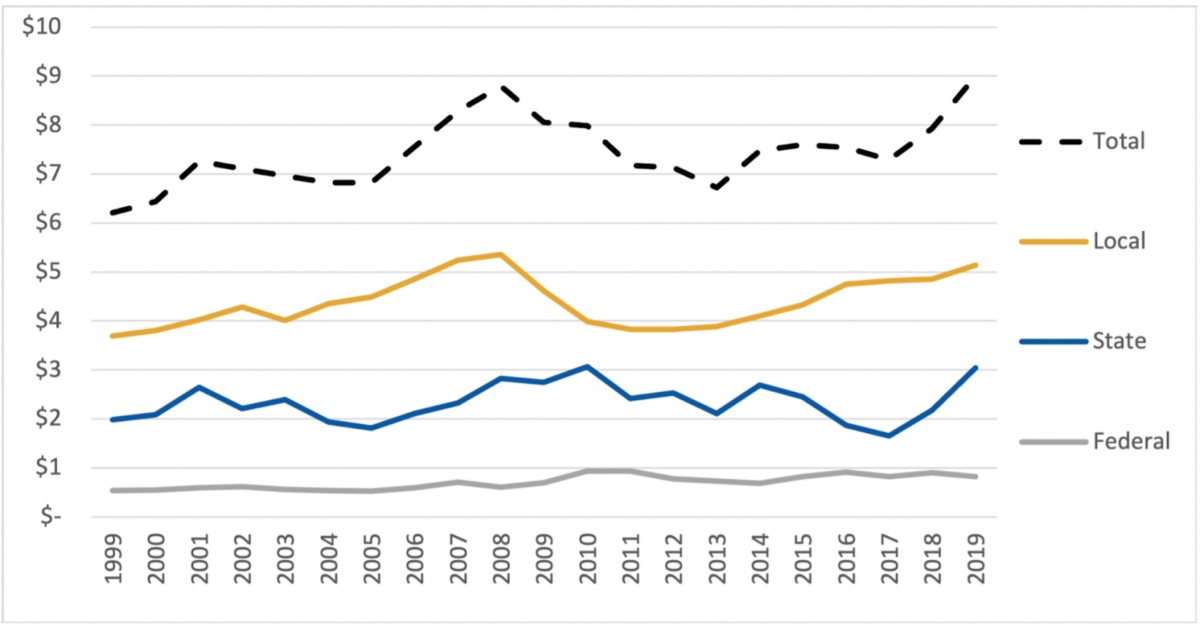 The Mineta Transportation Institute (MTI) at San Jose State University (SJSU) is an organized research and training unit with a network of faculty, research and administrative staff, and students committed to increasing mobility for all by improving the safety, efficiency, accessibility, and convenience of our nation’s transportation systems. Established by Congress in 1991, MTI leads and implements research, education, workforce development, and technology transfer at the highest standard to create a more connected world. The featured research was made possible through funding received from the State of California through the Road Repair and Accountability Act of 2017 (SB1).