“An American Story: Norman Mineta and His Legacy” to premier at San Francisco’s CAAMFest36 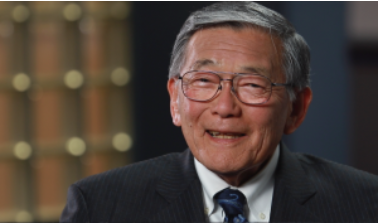 Former San Jose mayor, Democratic congressperson, cabinet secretary, founder of the Mineta Transportation Institute (MTI), veteran, and World War II incarceration camp survivor, Norman Mineta’s life premiers on the big screen in Dianne Fukami and Debra Nakatomi’s “An American Story: Norman Mineta and His Legacy.” It has been selected as the Opening Night film as part of the Center for Asian American Media’s (CAAM) film festival, or CAAMFest36, on May 10th in San Francisco’s Castro Theater.

“An American Story” highlights the challenges Mineta and his family faced while incarcerated at Heart Mountain, Wyoming as an 11-year old boy, inspiring him to become a community leader. Considered a man of many firsts, Mineta, according to producers Fukami and Nakatomi, personifies the dreams and aspirations of the Asian American community.

“MTI is tremendously proud to have Secretary Mineta as our founder,” says Dr. Karen Philbrick, Executive Director. “The nation is fortunate to have such a visionary leader who has served in so many important roles. He is truly an inspiration to us all.”

As the largest Asian American film festival in the country, CAAMFest celebrates local talent and stories from May 10-24 in conjunction with Asian Pacific Heritage Month’s 40th anniversary.  Mineta is set to attend the screening where he will also receive an honorary award from the City of San Francisco. MTI is proud to serve as a co-sponsor for the opening-night screening of “An American Story: Norman Mineta and His Legacy.”

To purchase tickets to the “An American Story: Norman Mineta and His Legacy” for opening night visit: http://caamfest.com/2018/films/american-story-norman-mineta-and-his-legacy/.