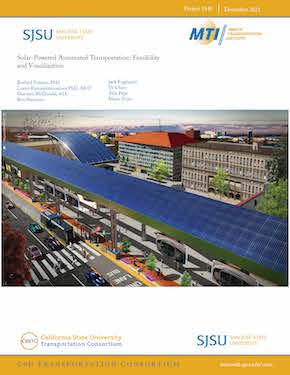 A solar-powered automated transportation network (ATN) connecting the North and South campuses of San José State University with three passenger stations was designed, visualized, and analyzed in terms of its energy usage, carbon offset, and cost. The study’s methodology included the use of tools and software such as ArcGIS, SketchUp, Infraworks, Sketchup, Rhinoceros, and Autodesk 3DS Max. ATN vehicle energy usage was estimated using data from the university’s Park & Ride shuttle bus operation and by modeling with SUMOPy, the advanced simulation suite for the micro-traffic simulator SUMO. The energy study showed that an extensive solar photovoltaic (PV) canopy over the guideway and stations is sufficient for the network to run 24/7 in better-than-zero net-metered conditions—even if ridership were to increase 15% above that predicted from SJSU Park & Ride shuttle data. The resulting energy system has a PV-rated output of 6.2 MW, a battery system capacity of 9.8 MWh, and an estimated cost of $11.4 million USD. The solar ATN also produces 98% lower CO2 and PM2.5 emissions compared to the Park & Ride shuttle bus. A team of experts including urban planners, architects, and engineers designed and visualized the conceptual prototype, including a comprehensive video explaining the need for solar ATN and what a typical rider would experience while utilizing the system. This research demonstrates both benefits and challenges for solar-powered ATN, as well as its functionality within the urban built environment to serve diverse San José neighborhoods.

Burford Furman is a professor of Mechanical Engineering at San José State University, where he has been since 1994. Prior to SJSU, he worked in disk drive development at IBM in San José from 1982 to 1993. He is also a registered professional mechanical engineer in the state of California since 1984. His areas of teaching and research are focused primarily in mechatronics, Automated Transit Networks (ATN), precision machine design, and dynamics. Burford is a Research Associate with the Mineta Transportation Institute (MTI) and was the Principal Investigator for a major study on the state of the ATN industry published by MTI in 2014. Since 2012, he has been working intensely with interdisciplinary groups of students to develop solar powered ATN.

Laxmi Ramasubramanian, an architect and a certified urban planner, is Chair of the Department of Urban and Regional Planning. She holds a Master’s degree in City Planning from MIT and a PhD in Environment-Behavior Studies from the University of Wisconsin-Milwaukee, in addition to degrees in architecture from her home country, India. Most recently, Dr. Ramasubramanian served as the Deputy Director of the Institute for Sustainable Cities in New York. Laxmi is the author of two books, Geographic Information Science and Public Participation and Essential Methods for Planning Practitioners: Skills and Techniques for Data Analysis, Visualization, and Communication, and numerous peer-reviewed book chapters, journal articles, and conference proceedings. She received the 2019 Dale Scholar Prize in recognition of her research that links theory with practice. As Research Associate with the Mineta Transportation Institute (MTI), Laxmi’s roles and responsibilities included preparing and guiding thoughtful and engaged planning students to work collaboratively with engineering students and community stakeholders to identify and resolve critical technical and societal challenges addressed by the Spartan Superway system, including diversity, equity, and inclusion.

Shannon McDonald is an Associate Professor at the School of Architecture at Southern Illinois University, Carbondale, IL since 2011. As an associate architecture professor at Southern Illinois University Professor McDonalds' research and areas of interest are with emerging mobility technologies and their impact on the built environment. Society is currently going through a period of transportation changes and how people move through space. These changes provide new options for designing places of living to become more sustainable and accessible for all. Energy, sustainability, movement, urban design, planning, transportation and architecture are now merging into new realities.

Ron Swenson is President of the International Institute of Sustainable Transportation (INIST, a non-profit) which has been a lead sponsor of the Spartan Superway. He has been an advisor to the undergraduate students and to graduate students as a thesis advisor. INIST organizes the annual international Podcar City Conference which has hosted the leaders in automated public transit since 2007 in Europe and the USA. Ron has done extensive research and development in solar powered transportation, building a prototype solar-powered electric tricycle (1981), a solar race car in Mexico (1992-1996), several electric bicycles and a solar powered utility vehicle (1998-2004), all which served to seed the development of solar powered automated transit networks in conjunction with San José State University (2012-present). Ron is also President of Swenson Solar, developer of commercial solar installations, solar homes in Montana and a proposed ecovillage of approximately 100 solar powered homes and apartments in Santa Cruz, California. He is a Fellow, Life member, and former Board member of the American Solar Energy Society.

Jack Fogelquist received his Masters in Mechanical Engineering from San José State University in 2019, and is now pursuing his PhD in mechanical engineering at the University of California, Davis. Jack’s Computational Aid For Designing PV Canopy For Solar-Powered Transit Masters research project was the basis for the Energy Systems project. The computational aid loads a user-defined transit route, models the hourly solar irradiance, estimates the energy demand of the transit system, determines the hourly shaded regions of the route, optimizes the size and shape of the PV canopy, and simulates the hourly electricity generation.

Yu Chiao is an architect with a bachelor’s degree in architecture from Taiwan and a current graduate student at the Department of Urban and Regional Planning at San José State University, focusing on ArcGIS, real estate development, and community design. Yu’s skill set includes several visualization programs such as ArcGIS, Rhino, SketchUp, Blender, AutoCAD, etc. He provides civil engineering and visualization support for the Spartan Superway project, including route planning, station design, and creating 3D city scenes of San José.

Mario Cruz is a Mexican product designer with a Master's degree in industrial design from the University of Cincinnati currently working as a design consultant for small businesses and startups in Mexico City. He is also currently collaborating with the product design studio Rodzmas in several multidisciplinary research and product development projects. Prior to his current line of work, he designed and developed promotional products for a vast array of clients from 2005 to 2015 which include: Kimberly Clark, Disney consumer products, Coca Cola, Hasbro, among others. Mario is also an independent design researcher with a keen interest in design methodology, narrative as a design principle and play as a learning tool. Since 2019, he has been working along with Rodzmas and the San José State University to develop a solar powered urban rapid transit system.