Human trafficking, a form of modern slavery, is the recruitment, transport, and/or transfer of persons using force, fraud, or coercion to exploit them for acts of labor, services, or sex. According to the International Labor Organization, 49.6 million people were living in modern slavery in 2021, of which 27.6 million were in forced labor and 12% of all those in forced labor were children.

Human trafficking is the fastest-growing organized crime with approximately $150B in annual profits. Like any business, trafficking relies on the transportation network—to recruit, move, or transfer their victims and to move goods produced by forced labor. Therefore, the transportation industry plays a critical role in preventing and combating human trafficking, as well as providing access for many survivors trying to leave their trafficking situation and obtain aid to rebuild their lives.

This National Human Trafficking Prevention Month, we are hosting a one-hour webinar featuring expert panelists to showcase efforts to combat this issue in the United States. Discussions will include the role of transportation agencies in facilitating effective prevention training programs and increasing accurate victim identification, as well as putting in place survivor-centered and trauma-informed response protocols.

Paul Chang serves as the Regional Anti-Human Trafficking Coordinator at the U.S. Department of Labor – Wage and Hour Division. In his 28+ years with the agency, Paul worked on some of the most celebrated cases as an investigator and Assistant District Director. He developed numerous training materials and programs, including the Enterprise Model that focuses on strategic approaches to prosecution, protection, and prevention of forced labor. Paul served as the National Co-Chair of the White House Initiative on Asian Americans Native Hawaiians and Pacific Islanders (WHIAANHPI) Regional Network. Paul is also a lecturer at Cal State LA’s MPA program and Vanguard University on Human Trafficking. He is the recipient of numerous Secretary’s Awards and community honors, including the 2019 Global Center for Women and Justice Diamond Award.

Holly Austin Gibbs is the System Director of the CommonSpirit Health Human Trafficking Response Program. Holly oversees efforts to implement policies, procedures, and education that assists providers in identifying patients who may be impacted by human trafficking and in offering trauma-informed services. In 2014, Holly released a book titled Walking Prey: How America’s Youth are Vulnerable to Sex Slavery; and in 2019, she received the Sister Concilia Moran Award from the Catholic Health Association. As a survivor of child sex trafficking, Holly has testified before Congress and consulted for organizations including the National Center for Missing & Exploited Children, U.S. Department of Health & Human Services, and the AMBER Alert program.

Polly Hanson coordinates with APTA stakeholders to develop transit security, risk and emergency management standards and policies. She serves as the Vice-chair of the TSA Surface Transportation Security Advisory Committee. Previously Ms. Hanson was the Chief of Police for AMTRAK, where she led a national police department responsible for protecting over 30 million passengers and 20,000 employees. Additionally, as the Chief of the Metro Transit Police in D.C., she led a tristate police department and directed the response to the terrorist attacks in Madrid and London. She received WMATA’s Carmen E. Turner Award, and the Conference of Minority Transportation Officials (COMTO) named Ms. Hanson a “Woman Who Moves the Nation.” Ms. Hanson is a member of the Operation Lifesaver, Inc Board of Directors.

Elizabeth Jespersen has spent over 30 years in both the public and private sector of Transportation. As VTA’s Manager of Organizational and Human Capital Development, Elizabeth is responsible for all employee training and development programs. She previously served as the Supervisor of Organizational Development and Training. Elizabeth was deeply involved with Diversity and Inclusion initiatives including serving on VTA’s Diversity and Inclusion Strategic Committee and leading VTA’s Discover Opportunities in Transit grant partnership with the Federal Transit Authority. With the Director of Policy and Compliance, Elizabeth manages the Not On Transit Grant, which will provide federal dollars towards eliminating human trafficking in and around the VTA system.

Dr. Yagci Sokat is an Assistant Professor of Business Analytics at San José State University and a Research Associate at the Mineta Transportation Institute with a passion for using analytics to alleviate human suffering in the areas of public health, humanitarian logistics, and human trafficking. Supported by the United States Department of Transportation, IBM, Valley Transportation Authority and San José State University, she has led various multi-disciplinary anti-trafficking projects and has served on several local anti-trafficking committees. She received her PhD in Industrial Engineering and Management Sciences from Northwestern University and holds master’s degrees from Georgia Institute of Technology with a Fulbright scholarship. 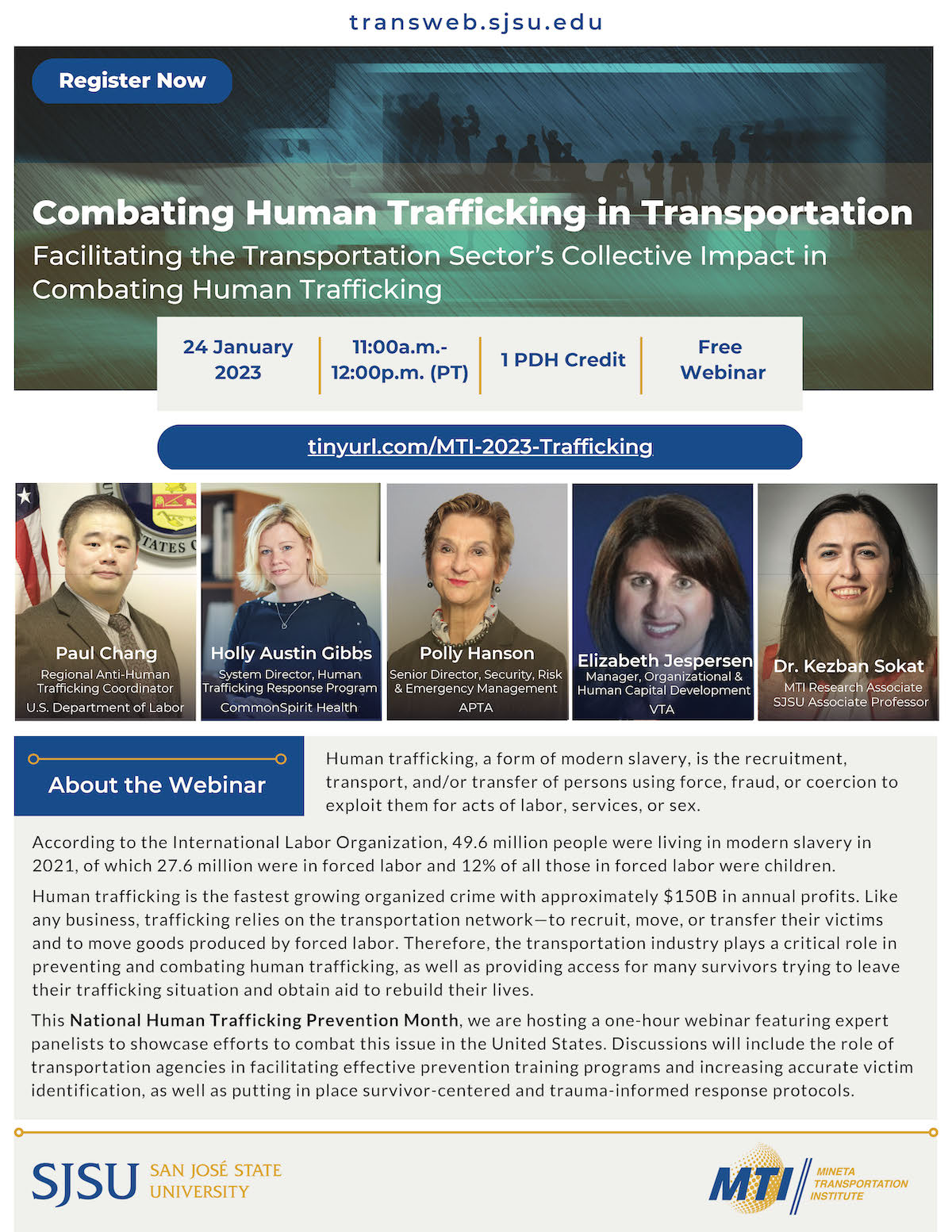