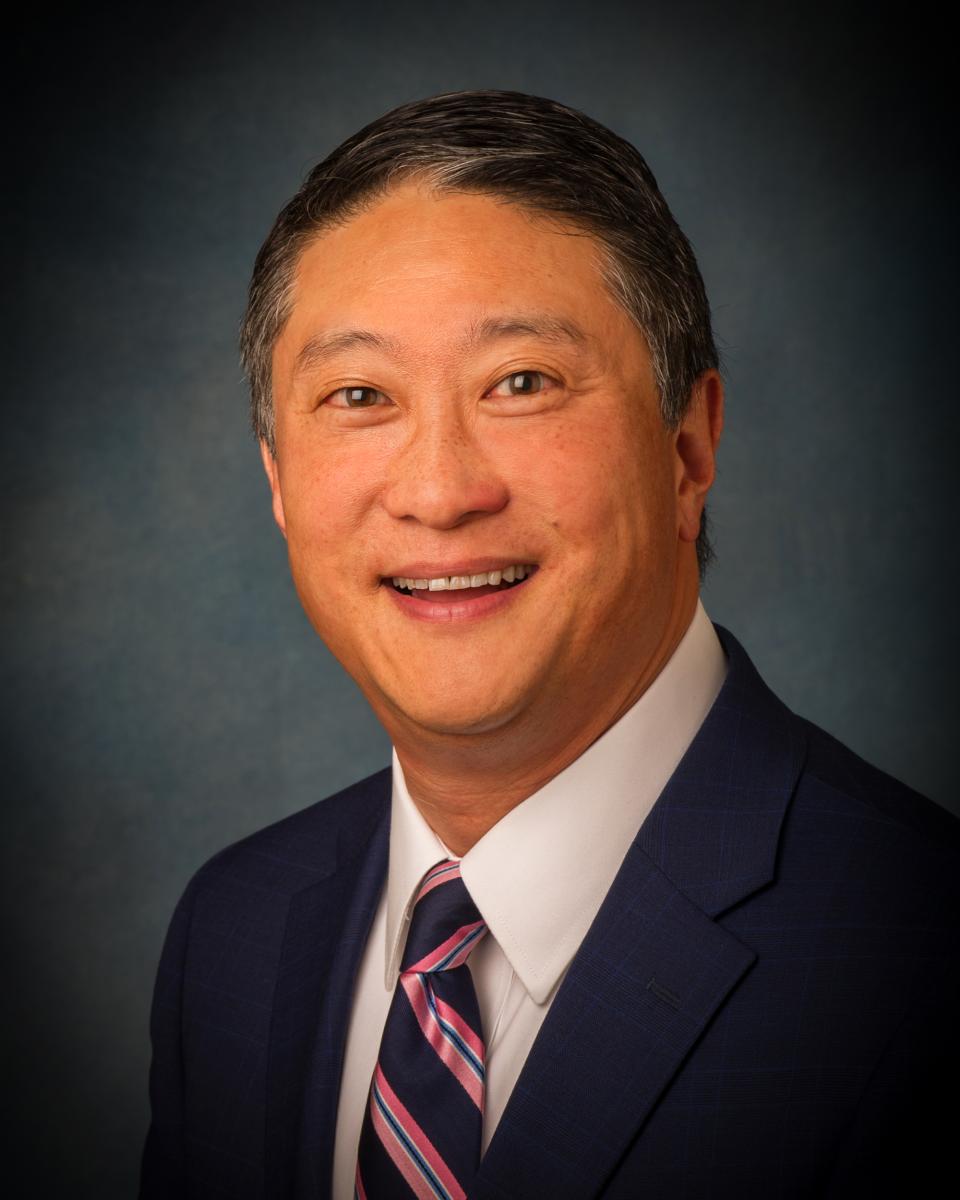 Mineta Transportation Institute (MTI) Trustee David S. Kim became the third Secretary of the California State Transportation Agency (CalSTA) on July 1, 2019 following his appointment by Governor Newsom. In his current position he oversees 40,000 employees in eight departments – including the Department of Motor Vehicles, Caltrans, California Highway Patrol, High-Speed Rail Authority, and others – who are responsible for making California’s transportation system safe, sustainable, and accessible for all. We recently reached out to Secretary Kim to find out more about his background, his role at CalSTA, and what personally motivates him to positively transform lives through transportation. Sec. Kim’s responses to our interview questions follow.

I’ll start first with the big picture – how civic engagement and public service were instilled in me at a young age – and then get into transportation.

I would say that both of my parents were unusual for first generation immigrants – they were actively involved in the community and really plugged into civic life with nonprofit organizations, local elections and so forth. They were true believers in the idea that it’s important for all of us to have a voice, to use it and to speak up for ourselves and our community. They always felt that if we fail to use that voice, we’re nothing more than spectators on the sidelines watching the game, but not playing in the game.

So, I learned those lessons of civic engagement early on while growing up in Davis, CA where I spent most of my childhood. Then, I lived in LA for about a decade as a young adult. It goes without saying that anyone who spends any amount of time in LA will have some thoughts about transportation.

Anyway, that’s the big picture. As far as transportation is concerned, people frequently ask me how the heck did I get interested in transportation? And why transportation, of all issues? Why not “bigger” or more prominent matters like international relations, national defense, health care, education and so forth? 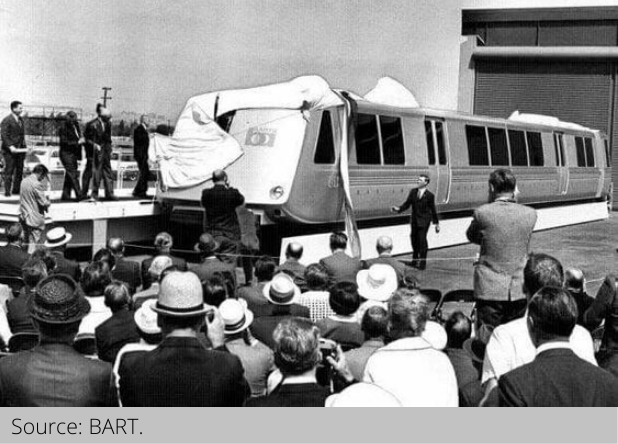 It goes all the way back to the opening of the Bay Area Rapid Transit (BART) system. That was in the ‘70s, and I was in elementary school at the time. One day, my dad suggested we hop in the car, drive to Berkeley and take a ride on the brand-new subway system. So, the entire family went – it was a family outing – and I was completely mesmerized by the experience and it made a lasting impression on me. It was clean, modern, state of the art at that time. A portion of the BART system is elevated, so you’re gliding over Berkeley, Oakland and other parts of the East Bay and watching the world go by. I found it completely fascinating. I was hooked.

Another equally formative experience was taking Amtrak for the first time. My family and I went on a summer vacation to Vancouver, British Columbia. We took Amtrak from Davis to Vancouver and this was in the very early days of Amtrak’s existence. I remember it was a two-day trip and just like riding on BART, the experience was unforgettable. I just found it captivating.

So, I guess you could say BART and Amtrak were responsible for planting the seed inside a young kid – and that seed would eventually turn into a career in transportation.

A few years later, my first job out of college was working for State Senator David Roberti in his LA office. That’s when I saw transportation planning and project delivery up close. The metrorail subway system was being developed, and I attended countless meetings with the transit agency, which was known then as the Southern California Rapid Transit District, or RTD. I also spent a lot of time with homeowner groups, businesses and other stakeholders who had strong views on the proposed alignment. Some were opposed, some were supportive, but all had a stake in the outcome. The experience really opened my eyes to transportation infrastructure and its potential to transform a community and change lives. It also gave me a glimpse into the nuts and bolts of transportation planning and the politics surrounding it.

Then, while attending graduate school, we learned about the nature of intergovernmental relationships. How do federal, state and local governments interact with one another? To what degree is the relationship cooperative, contentious or nonexistent? It occurred to me then and there that transportation perfectly exemplifies the importance of intergovernmental coordination and partnership. As we all know, transportation programs, projects and services oftentimes cannot become a reality without strong collaboration and cooperation between all levels of government.

So, little did I know it at the time, but working on transportation issues for Senator Roberti while simultaneously attending graduate school led me to decide, perhaps unconsciously, that I would “major” in transportation. In other words, of all the policy issues one could work on – and I covered a whole bunch of them – transportation was the area I would try to focus on more than any other because I found it not only interesting, but impactful and relevant to everyone’s lives.

What drives your interest today, and what do you hope to achieve as Secretary of CalSTA?

Fast forward many years, and here we are in 2021. I’ve had the good fortune of being able to work at all levels of government – local, state and federal – and the private sector as well. I lived and worked in the DC area for 25 years. While in DC, I did a stint in the auto industry working for Hyundai Motor Company and also spent eight years in the Obama Administration at the U.S. Department of Transportation and Federal Highway Administration.

All of those experiences and others prepared me well for my current role as Secretary of CalSTA. So, taking on this role has been a homecoming of sorts, and it has been tremendously gratifying to play a leadership role in the state where I was born and raised.

Even though I’m not brand new in the job, one of the most common questions I get from people is, “David, what’s your vision?”

So, we set out to write a vision statement. And quite simply, our vision is this: “To transform the lives of all Californians through a safe, accessible, low carbon, 21st century multimodal transportation system”.

Now, the first part of that statement – to transform the lives of all Californians – really speaks to the idea that transportation is about people and improving their quality of life.

Our job is to make sure that the mobility needs of individuals as well as society at large can thrive in a healthy, safe and productive manner. That’s what we try to do each and every day.

There are so many challenges and opportunities in front of us. Let me start by mentioning the statement on racial equity, justice and inclusion that we issued following the murder of George Floyd last summer.

To recap, here’s what we said:

“Transportation systems are about people and improving their quality of life. Unfortunately, those improvements historically have disproportionately benefited certain segments of the population. Far too often, past transportation decisions quite literally put up barriers, divided communities, and amplified racial inequalities, particularly in our Black and Brown neighborhoods.

The California State Transportation Agency (CalSTA) strongly condemns systemic racism and discrimination in all forms, including those historically entrenched in transportation. Enhancing the lives of all Californians – particularly people of color and disadvantaged communities – by connecting individuals to jobs, healthcare, education and other opportunities lie at the heart of what we do and why.

To that end, CalSTA firmly embraces racial equity, inclusion and diversity. These values are foundational to achieving our vision of a cleaner, safer, more accessible and more connected future.

We will be part of the solution. We will promote policies and programs that reflect principles of diversity, equity and inclusion, and will work with stakeholders to identify areas of improvement. Through these and other efforts, transportation systems have the potential to achieve their intended purpose – to provide safe and equitable access to opportunity and truly enhance quality of life.”

I think it’s critically important to talk about the connection between transportation and racial equity, or lack of it. We also need to own up to the fact that transportation decisions of the past oftentimes hurt communities of color – and we’ll do something about it.

While the statement was generally well-received, we know that words are only as good as the actions we take – actions speak louder than words – but they also may take more time.

So, our statement got the ball rolling, we’re already backing it up with tangible results and we expect a lot more in the future. We’re seeing deep, meaningful discussions on race and equity taking place at Caltrans as well as the California Transportation Commission and our other departments – discussions that are impacting the types of projects that will be funded and built going forward, and how our policies can better support racial equity. And how to fully integrate equity, justice and inclusion when it comes to transportation planning, decision making and project delivery – the idea is to make sure it’s front and center and not an afterthought or a talking point, but rather, a lens through which we will view all of our decisions and actions.

As we say in our statement, I think it simply comes down to this: transportation systems are about people. And so, we’re going to do everything we can to ensure that systems are designed and delivered in a manner that will provide equitable and safe access to opportunity – especially for people of color and disadvantaged communities – to truly enhance quality of life.

Because in the end, I think that’s what it’s all about. For those of us who consider transportation to be our calling in life, that’s why we’re here. That’s our purpose.

On top of that, we’ve got our hands full working on a bunch of other major initiatives. Just to name a few: 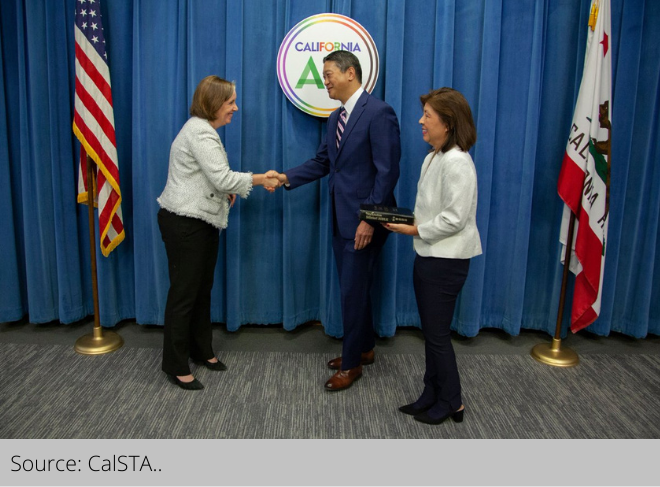 So, there’s a lot on the plate. I would also add there’s so much to look forward to this year, especially with the opportunity to build a close partnership with the new administration in Washington, the new leadership at USDOT and the beginning of a new session of Congress. Of course, we’re talking about funding. But beyond that, it’s also a golden opportunity to advance transportation policies that align well with the governor’s priorities and move us in the right direction from the standpoint of promoting greater multimodal options, helping transit systems rebound, improving mobility, encouraging greater mode shift, reducing vehicles miles traveled, as well as carbon emissions that come from transportation.

I’ll also add that we eagerly look forward to working closely with the new chairs of the Senate and Assembly Transportation Committees, Senator Lena Gonzalez and Assemblymember Laura Friedman. Both bring good perspectives and ideas to the job, and I think it’ll be a productive year when it comes to state legislation, so there’s much to look forward to in Sacramento as well.

Secretary Kim continues to support MTI’s workforce development programs, including the Masters of Science in Transportation Management program — where he recently served as a guest lecturer. We are grateful for the opportunity to get to know him better and for his ongoing advancement of safe, accessible, and equitable transportation in California and beyond.