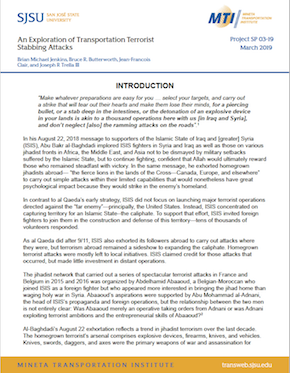 In his August 22, 2018 message to supporters of the Islamic State of Iraq and [greater] Syria (ISIS), Abu Bakr al-Baghdadi implored ISIS fighters in Syria and Iraq as well as those on various jihadist fronts in Africa, the Middle East, and Asia not to be dismayed by military setbacks suffered by the Islamic State, but to continue fighting, confident that Allah would ultimately reward those who remained steadfast with victory. In the same message, he exhorted homegrown jihadists abroad— “the fierce lions in the lands of the Cross—Canada, Europe, and elsewhere” to carry out simple attacks within their limited capabilities that would nonetheless have great psychological impact because they would strike in the enemy’s homeland.

Previous reports by the Mineta Transportation Institute have addressed bombings (see "Suicide Bombings Against Trains and Buses Are Lethal but Few in Number" and "Explosives and Incendiaries Used in Terrorist Attacks on Public Surface Transportation: A Preliminary Empirical Analysis"). Car ramming attacks or what are sometimes called vehicular rammings have been the subject of more recent reporting. This report looks first at terrorist stabbing attacks against the public as a general phenomenon, and then examines stabbing attacks in public surface transportation venues.

As a leading authority on terrorism and sophisticated crime, Brian Michael Jenkins works with government agencies, international organizations and multinational corporations. He has directed MTI’s continuing research on protecting surface transportation against terrorist attacks. He is also a senior advisor to the president of RAND. From 1989-1998, Mr. Jenkins was deputy chairman of Kroll Associates, an international investigative and consulting firm. Before that, he was chairman of RAND’s Political Science Department where he also directed RAND’s research on political violence.

Commissioned in the infantry, Mr. Jenkins became a paratrooper and a captain in the Green Berets. He is a decorated combat veteran having served in the Seventh Special Forces Group in the Dominican Republic and with the Fifth Special Forces Group in Vietnam. He returned to Vietnam as a member of the Long Range Planning Task Group, receiving the Department of the Army's highest award for his service.

Since then, he has served on numerous U.S. and international task forces investigating terrorist attacks. In1996, President Clinton appointed Mr. Jenkins to be a member of the White House Commission on Aviation Safety and Security. He served as an advisor to the National Commission on Terrorism and has served on the U.S. Comptroller General's Advisory Board.

Mr. Jenkins is the author of several articles, reports and books, including International Terrorism: A New Mode of Conflict and Will Terrorists Go Nuclear?

Jean-Francois Clair is a former Inspector General of Police. He served 35 years in France’s Security Service, the Directorate of Territorial Security (Direction de la Surveillance du Territoire) (DST), the country’s internal intelligence system with responsibilities similar to those of the FBI in the United States and MI-5 in the United Kingdom. From 1983 to 1997, he was the head of DST’s Anti-Terrorist Branch. In 1998, he was promoted to deputy director of DST, a position he held until his retirement in 2007.

Dr. Clair received a PhD in Public Law from the University of Paris in 1969 and graduated from the Institute for Higher Studies for National Defense (Institut des haute études de défense nationale) (IHEDN) in 1993.

Dr. Clair currently teaches in the Graduate School of International Affairs at the institute d’Etudes Politiques de Paris (Sciences-Po) and at the Institute for International and Strategic Research (IRIS). He is a frequent lecturer at the George Marshall Center in Garmisch, Germany, and he has participated in international symposia on terrorism and security issues (Singapore, 2007 and 2008; Berlin, 2008; and Oslo, 2009). He is also in charge of research for the French Administration.