Community Benefits and Lessons for Local Engagement in a California Open Streets Event: A Mixed-Methods Assessment of Viva CalleSJ 2018 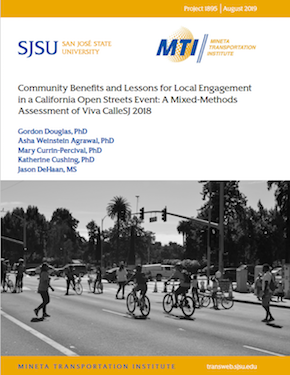 This report presents the findings from an evaluation of the September 2018 Viva CalleSJ open streets event in San José, CA.  The research was designed to assess the success of the event, guide planning for future open streets events, and inform potential funders and community partners about the benefits of such events.  To gather the impressions of participants, local residents, and workers at businesses along the event route, the mixed-methods study analyzed results from a survey of 1,571 participants, 114 interviews with community members and businesses, and participant observations. Researchers also examined social media presence and a related augmented reality gaming component.

The study found that Viva CalleSJ 2018 participants were resoundingly positive about their experience. Many said that the event brought people together from across the city and inspired a sense of community and civic pride, and the majority of participants benefited from at least one hour of physical activity. Most local businesses and residents viewed the event positively as well, and many food and beverage outlets appeared to benefit from increased patronage during the event. However, some shopkeepers along the event route and residents in surrounding neighborhoods were not aware of Viva CalleSJ in the weeks prior to it happening or did not have a clear understanding of how it might impact them. Some were wary of the road closures and in some cases were ultimately frustrated by what they perceived to be negative impacts on their businesses.

Gordon Douglas is an assistant professor of urban and regional planning at San José State University, where he also serves as director of the Institute for Metropolitan Studies. A multidisciplinary urbanist, Gordon’s research, teaching, and community work focus on questions of social equity and cultural identity in urban planning and development. He is the author of The Help-Yourself City: Legitimacy and Inequality in DIY Urbanism (OUP 2018) and his research, writing, and photography have appeared in publications such as City and Community, Urban Studies, the Journal of Urban Design, and a variety of magazines, newspapers, and blogs. Gordon received his doctorate in sociology from the University of Chicago and also holds degrees from the University of Southern California and the London School of Economics and Political Science.

Mary Currin-Percival is an assistant professor in the Department of Political Science at San José State University. She teaches courses in American Government, American Institutions, and Mass Political Behavior and is course coordinator for the American Institutions courses. Her research focuses on public opinion, teaching and learning in political science, and news media. Her work has appeared in several journals, including: PS: Political Science and Politics, International Migration, Journal of Elections, Public Opinion and Parties, and Digital Journalism.

Dr. Cushing is the Executive Director of CommUniverCity SJSU, a nationally recognized partnership between the City of San José, San José State University, and downtown residents focused on improving community health and the environment, fostering a college-going culture in area youth, and enhancing neighborhood infrastructure in low-income communities. She is also a Professor in the Department of Environmental Studies at San José State University, where she directs the Global Studies program and advises the Provost’s Office on sustainability strategy. Her primary areas of expertise are community-engaged learning, water resources management, environmental policy implementation, and sustainability in higher education. She earned a BS in Industrial Engineering from Northwestern University and an MS and PhD in Civil and Environmental Engineering from Stanford University, where she served as the Associate Director for Urban Studies.

Jason DeHaan is a lecturer in the Department of Sociology and Interdisciplinary Social Sciences at San José State University. He teaches courses on research methods, writing, and statistical analysis. He earned his MS in sociology from the University of Oregon, where he is currently working on his PhD His research focuses on the relationship between urban branding and urban form.