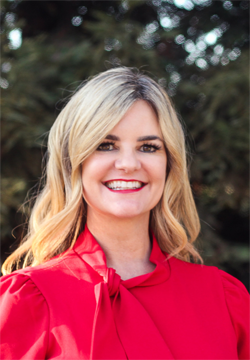 Prior to joining MTI, Dr. Philbrick shaped the field of transportation in a variety of roles, including as assistant director of the National Center for Intermodal Transportation at the University of Denver. She has been appointed four times by the U.S. Secretary of Transportation (Secretaries LaHood, Foxx, Chao, and most recently Buttigieg) to sit on the USDOT Transit Advisory Committee for Safety (TRACS) where she chaired the FTA Administrator’s Tasking 14-02 which identified key elements of a safety management system approach to fatigue management.

Long committed to the USDOT University Transportation Center program, she was elected to serve the Council of University Transportation Centers (CUTC) in several roles, including President in 2018-19. Dr. Philbrick also has the privilege of serving as the President of the Research and Education Division (RED) of the American Road and Transportation Builders Association (ARTBA), where she also sits on the ARTBA Board of Directors and Executive Committee. Dr. Phillbrick is part of the Transportation Research Board (TRB) Committees on “Transit Safety and Security” (AP080)  and “Passenger Rail Transportation” (AR010), where she also serves as the research task force lead. She currently co-chairs the TCRP F-29 panel “Mental Health, Wellness, and Resilience for Transit System Workers”.

With an eye toward seamless and equitable transportation for all, Karen also serves the industry through elected positions on the boards of the American Public Transportation Association (APTA), the International Transportation Learning Center (ITLC), and NASA's Academic Mission Services Science and Technology Council. She was an appointed research advisor to the APTA Mobility Recovery and Restoration Task Force.

Committed to recruiting, retaining, and advancing women in the transportation industry, Dr. Philbrick also serves on the Women in Transportation Seminar (WTS) International Board, after serving three terms on the WTS Foundation Board. She contributes to her community through the Rotary Club of San José, where she has served as a board member, and where she will be elevated to President July 1, 2023.

A frequently invited keynote speaker, Dr. Philbrick has also delivered federal congressional briefings and invited testimony to the California Senate Transportation Committee and the Assembly Transportation Committee. Her other intellectual contributions include a bimonthly column on transportation in the San Jose Spotlight, the recipient of the national Publisher of the Year award for independent online news, invited articles for the Hoover Institution at Stanford University, and peer-reviewed journal articles focused on models of accident risk and fatigue in railroad operations, psychological trauma and transportation accidents —including grade crossing and trespasser incidents —and cross cultural differences in helping behavior.

Dr. Philbrick holds a PhD from the University of Denver and an MA and EdM from Columbia University. She earned her undergraduate degree from California State University, Fresno.