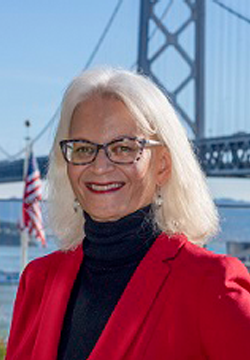 McMillan previously worked for 25 years at MTC, and for more than eight years as MTC’s deputy executive director for Policy before her 2009 appointment by then-President Barack Obama to serve as deputy administrator of the Federal Transit Administration in the U.S. Department of Transportation. McMillan subsequently served as Acting FTA administrator from March 2014 to March 2016 before taking the position as Los Angeles County Metropolitan Transportation Authority’s chief planning officer in April 2016. During the final five years of her original MTC tenure, McMillan also was an instructor of transportation funding and finance in the Transportation Management Graduate program at San Jose State University’s Mineta Transportation Institute.

McMillan has served since 2012 as a member of the Advisory Board for the UCLA Lewis Center for Regional Policy Studies and was named a senior fellow for the 2011-12 academic year at the UCLA Luskin School of Public Affairs. She received an Alumni Award of Distinction from the U.C. Davis College of Agriculture and Environmental Studies in 2016; a ‘Women Moving the Nation’ award from the Conference of Minority Transportation Officials in 2013; and a Distinguished Alumna Award from the U.C. Berkeley College of Environmental Design in 2011.