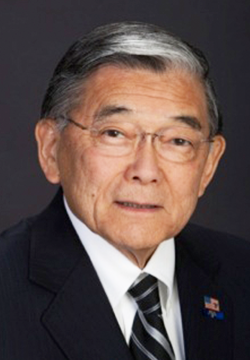 Secretary, US Department of Transportation (Retired)

He was well known for his work in the areas of transportation—including aviation, surface transportation and infrastructure—and national security. He has been recognized for his accomplishments in economic development, science and technology policy, foreign and domestic trade, budgetary issues and civil rights. Mineta’s career in public service was both distinguished and unique. For almost 30 years, Mineta represented San Jose, California, first on the City Council, then as mayor and then as a member of the U.S. Congress. Throughout that time, Mineta was an advocate of the burgeoning technology industry. He worked to encourage new industries, spur job growth, and supported the development of the infrastructure needed to accommodate the technology industry and its tremendous growth.

In 2000, President Bill Clinton appointed Mineta Secretary of Commerce. There, Mineta was known for his work on technology issues, achieving international cooperation and intergovernmental coordination on complex fisheries issues and for streamlining the patent and trademark process.

President George W. Bush appointed Mineta Secretary of Transportation, where he served until 2006. Following the horrific terrorist acts of September 11, 2001, Mineta grounded all aviation flights and then guided the creation of the Transportation Security Administration—an agency with more than 65,000 employees— marking the largest mobilization of a new federal agency since World War II. Mineta was also a vice president of Lockheed Martin, where he oversaw the first successful implementation of the EZ-Pass system in New York State.

Recognized for his leadership, Mineta has received numerous awards, including the Presidential Medal of Freedom—the highest civilian honor in the United States—and the Wright Brothers Memorial Trophy, which is awarded for significant public service of enduring value to aviation in the United States. In February 2016, he was named a Chubb Fellow at Yale University. While in Congress, he was the co-founder of the Congressional Asian Pacific American Caucus and chair of the National Civil Aviation Review Commission in 1997.

He is survived by his wife, Danealia (Deni) Mineta, and has two sons, David K. Mineta and Stuart S. Mineta and two stepsons, Robert M. Brantner and Mark D. Brantner.