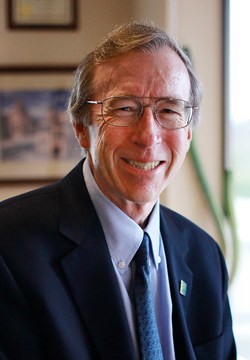 Kevin Duggan served in local government for over 40 years including 27 years as a city manager in the San Francisco Bay Area. He began his career as an administrative intern for the City of Mountain View while earning a BA in Political Science from San Jose State. He then served as an intern for the City of Campbell while obtaining his MPA, also from San Jose State. He worked for Campbell for 18 years, the last 6 as city manager. He then returned to Mountain View in 1990 as city manager where he served until April of 2011.

He has served as President of both the City Manager’s Department of the League of California Cities and Cal-ICMA. Other professional activities have included serving on the State Board of Fire Services, participating in an international city management exchange with Limerick County, Ireland and serving on ICMA’s Task Force on Organizational Structure and Governance. In 2013 he was awarded the National Public Service Award by American Society for Public Administration and National Academy of Public Administration. In 2019 he received ICMA’s Distinguished Service Award.

He currently serves as an ICMA/LCC volunteer Senior Advisor in the San Francisco Bay Area.