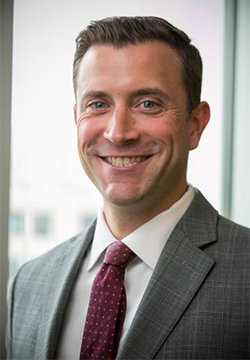 As the Association of American Railroads (AAR’s) president and CEO, Jefferies advocates for and works with member railroads to ensure the continued viability of America’s railroad industry. Prior to assuming the role on January 1, 2019, Jefferies was the senior vice president of AAR’s government affairs where he led the development, promotion and implementation of legislative priorities for the AAR.

Before joining the AAR, Jefferies cultivated more than a decade of experience working within government. From 2009 to 2013, Jefferies served as a senior policy advisor to the Chairman of the U.S. Senate Committee on Commerce, Science and Transportation. In this role, Jefferies provided policy guidance on a host of transportation issues, including railroad economic regulation, rail safety and passenger rail. Jefferies also led the successful development, negotiation and reauthorization of major infrastructure legislation and managed the successful conference of Committee legislation relating to the 2012 surface transportation reauthorization law, MAP 21.

Jefferies began his career in government serving as a Senior Advisor to the Mayor of Lexington, Kentucky, before transitioning to the federal government. Prior to serving in the United States Senate, he worked for the U.S. Department of Transportation, Office of the Inspector General and the U.S. Government Accountability Office. In these roles, Jefferies led program reviews on a variety of issues including infrastructure development, international trade, major weapon systems acquisition and federal contracting.

Jefferies received his Master of Science in public policy and management from Carnegie Mellon University in Pittsburgh, PA and his Bachelor of Science in economics from the University of Kentucky in Lexington, KY.

Jefferies and his wife reside with their three children in Alexandria, VA.