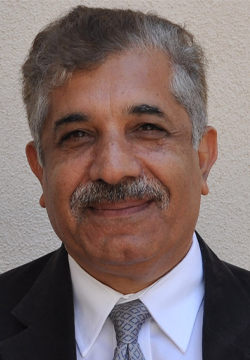 Dr. Hamid Rahai is a professor in the Departments of Mechanical and Aerospace Engineering & Biomedical Engineering and the Associate Dean for Research and Graduate Studies in the College of Engineering at California State University, Long Beach (CSULB). He has taught various classes at the undergraduate and graduate levels in the areas of fluid dynamics, thermodynamics, heat transfer, instrumentation, numerical methods, and turbulence. He has supervised over 80 M.S. theses and projects and Ph.D. dissertations and has published more than 90 technical papers. He has received more than 10 million dollars in grants and contracts from the National Science Foundation, Federal Highway Administration, California Energy Commission, California Air Resources Board, Port of Los Angeles, Caltrans, Boeing Company, Southern California Edison, Long Beach Airport, and Long Beach Transit, among others. He has been granted a patent for the development of a high-efficiency vertical axis wind turbine (VAWT) and another patent with Via Verde Company on wind turbine apparatuses. He also has pending patents on a new conformal vortex generator tape for reducing wing-tip vortices, and one based on previous MTI-funded research for reducing NOx emissions of gas-powered engines using a humid air system. For the past 26 years, he has been a consultant to local energy and aerospace industries. Dr. Rahai is the recipient of several scholarly and creative activities awards (RSCA), including the 2012 CSULB Impact Accomplishment of the Year in RSCA Award, the 2002–2003 CSULB Distinguished Faculty RSCA Award,  the 2004 Northrop Grumman Excellence in Teaching Award, and a 2005-06 Merit of Scholarship Award by the Southern California Chapter of the American Society of Heating, Refrigerating and Air Conditioning Engineers (ASHRAE). In 2014, Dr. Rahai received the Outstanding Engineering Educator Award from the Orange County Engineering Council in California, and in 2019 he was inducted as a senior member of the National Academy of Inventors (NAI).