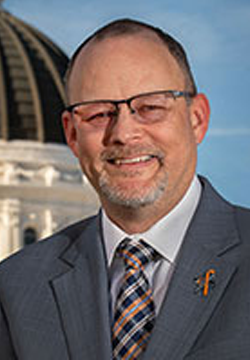 Director Keck has served Caltrans for more than 21 years, most recently as the Chief Financial Officer since 2018. In that capacity Steven had oversight of the Department’s Division of Accounting, Division of Budgets, Division of Financial Programming, the Transportation Asset Management Program, the SB-1 Program, and the Road Charge Program. Prior to becoming CFO, Mr. Keck had been the Chief Budget Officer for the Department for more than 8 years. Steven began his career at Caltrans in 2000 where he worked on funding for the state’s Toll Bridge Seismic Retrofit Program. During his tenure with the Department Director Keck has held various roles in Finance and has acted in various roles within Caltrans’ Districts and Headquarters.

Prior to Caltrans, Director Keck began his civil service career at the California Department of Forestry and Fire Protection (now CalFire), managing the capital outlay program for facilities replacement. Director Keck is a graduate of Humboldt State University, with a Bachelor of Science degree in Resource Management, and a minor in Environmental Ethics. Director Keck is recognized as a prominent expert in transportation funding and over the past two decades, has been involved in almost every area of Caltrans. In his free time, he enjoys striving for “continuous improvement” at golf and tinkering with electronics and vintage watches.