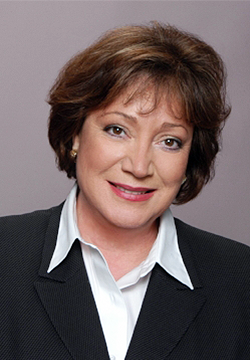 Rose Castillo Guilbault is a Communications and Public Affairs Executive with an impressive history of success in business, media, and the community. Widely recognized as an influential leader, Ms. Guilbault has received many prestigious awards. She was named one of the 25 Most Influential Hispanics in the Bay for two consecutive years and honored as one of the Most Influential Women in Bay Area Business for three consecutive years. In 2011, she was named Forever Influential. She received the Eleanor Roosevelt Humanitarian Award from the San Francisco United Nations Association; was inducted into the San Mateo County Woman’s Hall of Fame; was named a “Woman Who Could Be President” by the San Francisco League of Women Voters; and was appointed by President George Bush to the President’s Advisory Commission on Educational Excellence for Hispanic Americans.

Ms. Guilbault has made significant contributions as a business leader. While with AAA Northern California, Nevada, Utah, and CSAA, she was the founding President of the Community Safety Foundation; Vice-President of Communications and Social Responsibility; Chief Diversity Officer; and Vice President, Corporate Affairs and Publishing. As a member of the executive team, she led numerous efforts that strengthened company image and performance during times of significant organizational change.

Before joining CSAA/AAA, Ms. Guilbault held very high-profile roles in media including Editorial and Public Affairs Director for KGO-TV’s (ABC San Francisco). During her broadcasting career, she received a number of honors for her work in television broadcasting including an EMMY; Western Woman of Achievement from American Women in Radio and Television; and Innovator of the Year from the National Broadcast Community Affairs Association.

Ms. Guilbault is a published author. Her latest book is “The Latina's Guide to Success in the Workplace.” She also wrote the critically acclaimed memoir, “Farmworker’s Daughter: Growing Up Mexican in America.” She was featured in the exhibit “Latinas, the Spirit of California” at the California Museum for History, Women and the Arts in Sacramento. She earned a BA in journalism from San José State University, an MA from the University of San Francisco, and an MBA from Pepperdine University. She is fluent in Spanish.